Hey there, good lookin’. Do you come here often? Did you hear the bad news? I’m supposed to kill you. No, no, I’m not dropping names and he definitely does not have the twitter handle @JeffSpeckAICP. But here’s a better idea. How about I buy you a drink in hopes that I get lucky (lucky enough to have safe and appealing streets where people enjoy life).

And here’s the thing, smartypants: I know you’re not to blame. Not really.

You’ve been given all the wrong parameters and the phony metrics and the appearance of doing “objective math” on how to move the cars. Everyone else is doing it. What are you supposed to do?

I get it. I’m here for you, I see you here drowning in your sorrows as you try to find a way to deal with the inhumane practices you’ve been told to deploy on poor, unsuspecting cities across the world. There’s a way out, and I can help you (and nobody, and I mean nobody, has to die).


Do you know who can help fix this? Urban Planners.

Tell them they need to give you better parameters to work with. Tell them it all starts with aligning the metrics with broad goals of the city. Tell them they should facilitate REAL conversations with their city’s leadership.

Unless these Planners have, because they’ve probably tried, and they probably wish they were more effective, and they are likely dealing with people who don’t get it -- and maybe nobody from their team has heard of a stroad (the ugly, deadly hybrid of street and road). So help them. Join forces. COL-LAB-OR-ATE! With your powers combined, you could do amazing plan-gineering things. Amazing things like (re)design streets that are loved by local residents and business owners alike. Streets with character and destinations for lively, not deadly, places people love. Sure, you'll still have the naysayers. Those troublesome folks probably say, “My city isn’t Paris” and “here, people are different.” But, if you take a close look at those bipedal humanoids in the City of Not-Paris, I guarantee they have similar walking and biking abilities to those “Paris weirdos.” The difference, undoubtedly, is largely due to whether or not urban design has been applied along a city’s streets to make them appealing, comfortable, and connected. What are you doing for people who deserve appealing streets? Don’t tell me, you have meandering sidewalks that accommodate the drunk pedestrian as they stumble their way to nowhere. I’m not in the mood to be depressed; it makes me homicidal. So, let me ask again: What are you doing now? You, the person who can kick ass and take names with the best of them. The smart (and sexy) Traffic Engineer that you are can be a force for good. A mighty force. Someone who is trained to solve problems with math and physics. Not that fake math crap that the traffic engineering standards would have you believe are a measure of anything worthwhile. You need design parameters that align with the city's goals.

A wise man once said: Pick your winners.

Winners are streets (or redesigned stroads) with the opportunity for Sprawl Repair. Find as many as you can. Recruit help. Build a sense of community while you build your physical community. Acknowledge that solving for free flowing, quick, convenient car travel works cross-purposes for the community life along these streets. Pick your winners, and design streets to beautiful places to hang out, be safe, be comfortable, and be a places that inspire people to love their city. There’s a broad community of doers here who can help. 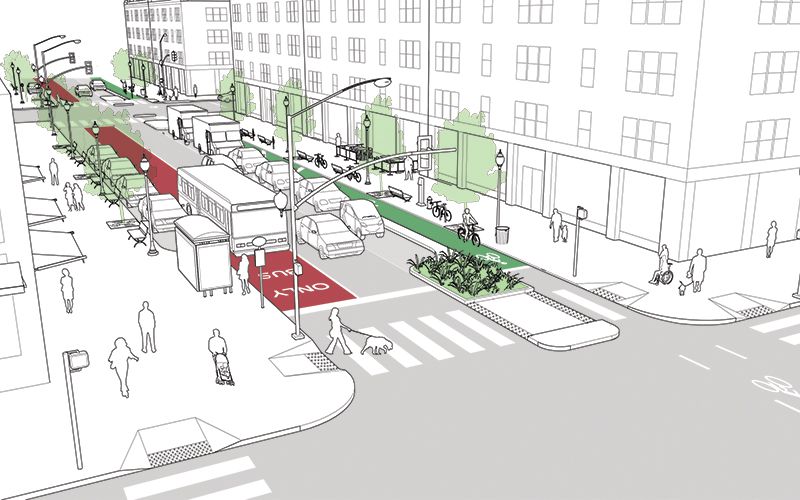 Posted by Ryan Wozniak, AICP at 9:57 PM No comments:

If you don't follow the Twitters, you may have missed the trending topic of #infrastructure as of yesterday when whitehouse.gov posted some guidelines and a legislative framework to make America's infrastructure great again. I went to the source, and at every turn of the Trump Administration's "Building a Stronger America" initiative, there is a common combination of proposals:


All types of infrastructure share in the aggressive shift of goals from serving the public interest to returns on investments. The topics range from water infrastructure, to access roads to public lands for resource extraction, to transportation (among others). Every type of infrastructure on the list, based on my review, all elements achieve the magic combination above.

Trump's proposal may not pass, but there are enough scary concepts that should be blocked before they become enacted by legislation. The bad ideas, taken one at a time, can be misleadingly tame in their quantity of terribility. Taken together, they're terribly terrible. The compounding terribility is akin to the compounding of the words: (1)Trump, (2) talking, (3) with women, (4) grabbing, and (5) grabbing by... nevermind. This demonstrates the wrong combination of things make the terrible, terrifying.

How does this relate to the much talked about #Infrastructure plan?

So let me explain how the wrong combination of proposals, bad city fiscal statuses, and desperation of cities can result in local governments being robbed by the wealthy investor class and savvy developer (legally, of course).

Potentially good ideas by themselves:
The Federal cost-share allocated to the cities in years prior have not always been used effectively. I point to the good work at Strong Towns to illustrate the arguments that liabilities of our over-built, under-utilized, poorly maintained roads, highways, interstates, bridges, and tunnels add up to a bunch of places that have a frightening fiscal future ahead of them as a lot of bills are coming due. Many at the same time.

What cities have been able to do effectively with a Federal project funds is to use it as leverage in bringing needed resources to the negotiations of PPPs. Transit stations could be (and have been) designed with space that offers leased space (maybe managed by and profitable to private firms operating within) that offered a return to the city. This is an example of value capture. Value capture studies record these returns at 6.5% to 7%, even in American cities where value capture is rare and not pursued aggressively (as it is in Hong Kong or Tokyo).

My expectation is, without those Federal project funds, cities will have far less leverage in the negotiations of PPPs. Instead, cash-strapped cities will compete over a limited supply of capable investors (compounded by the preserved lending power left over from quantitative easing policies). In the mismatched supply and demand, cities with desperate needs will be forced to take desperate measures with little guidance for best practices in how to navigate the new terrain of private funding and managing the new federally mandated value capture aspect to the project.

And with the private sector stepping in and financing the major share of these infrastructure projects, would they not be best suited to be first in line for the value captured from these brand new projects? As a mortgage holder, I know that my payments are meant to slowly benefit the principal owed. Would the financiers not treat cities similarly? Would the value capture rate not first benefit the investors? Will the private parties defer maintenance so that by the time the city starts to get a cut on the value capture that those returns will be eaten up on additional costs associated with older equipment and infrastructure? With a profit motive, is there not opportunity to see value capture models get aggressive?

Some of these ideas (i.e. value capture) work well on their own, but in conjunction with the rest of the conditions, I have serious concerns that the trillions of dollars worth of work that is needed across the country will be inequitable, insufficient, and parasitic results due to the ideological (not empirical) motivations to punish all forms of government, who supposedly does not contribute to wealth (according to the right-wing libertarian basic talking points), and continue the long played game of privatizing the profits and socializing the liabilities.

I hope I am wrong.

I also hope that if I am right that we move beyond the question of how much to spend, and talk about how it is spent.
Posted by Ryan Wozniak, AICP at 11:34 PM No comments:

Ryan Wozniak, AICP
Continuously learning about the shaping of our cities. I love what I do. Follow my blog to share in the quest to understand the makings of great communities.